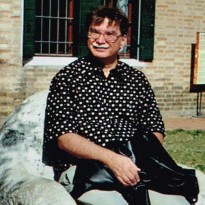 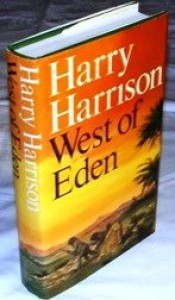 I was at a science fiction bookstore back in the 80s shooting the bull with a few people. This included a well known science fiction writer who will remain nameless. Someone mentioned West of Eden by Harry Harrison which recently came out and asked if anyone liked it. The SF writer said "I read it. This is how Harrison came up with the idea", then proceeded to imitate a man pulling something from his ass.

I didn't think it was all that bad but it isn't up to Harrison's best. In style, Harry Edison was basically a pulp science fiction writer mainly known for his Stainless Steel Rat series. In West of Eden the author was trying for an epic somewhere between Dune and Clan of The Cave Bear and doesn't quite succeed. It's enjoyable but a lot on the silly side. The premise is great: Dinosaurs do not go extinct and become the dominant intelligent species on earth with humans languishing behind. It's a good potboiler if you like that sort of thing. But whenever I think about this book, I remember two things: The experience I related above and a bumper sticker I saw a few years ago, "I've got flying monkeys and I'm not afraid to use them."
Tweet
1398 BOOKS
Facebook Google Plus